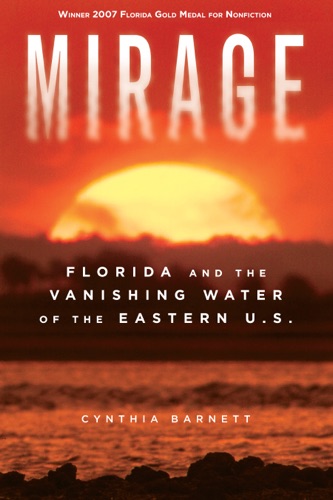 “Never before has the case been more compellingly made that America’s dependence on a free and abundant water supply has become an illusion. Cynthia Barnett does it by telling us the stories of the amazing personalities behind our water wars, the stunning contradictions that allow the wettest state to have the most watered lawns, and the thorough research that makes her conclusions inescapable. Barnett has established herself as one of Florida’s best journalists and Mirage is a must-read for anyone who cares about the future of the state.”

“Mirage is the finest general study to date of the freshwater-supply crisis in Florida. Well-meaning villains abound in Cynthia Barnett’s story, but so too do heroes, such as Arthur R. Marshall Jr., Nathaniel Reed, and Marjorie Harris Carr. The author’s research is as thorough as her prose is graceful. Drinking water is the new oil. Get used to it.”

—Michael Gannon, Distinguished Professor of history, University of Florida, and author of Florida: A Short History

“With lively prose and a journalist’s eye for a good story, Cynthia Barnett offers a sobering account of water scarcity problems facing Florida—one of our wettest states—and the rest of the East Coast. Drawing on lessons learned from the American West, Mirage uses the lens of cultural attitudes about water use and misuse to plead for reform. Sure to engage and fascinate as it informs.”

Part investigative journalism, part environmental history, Mirage reveals how the eastern half of the nation—historically so wet that early settlers predicted it would never even need irrigation—has squandered so much of its abundant freshwater that it now faces shortages and conflicts once unique to the arid West.

Florida’s parched swamps and supersized residential developments set the stage in the first book to call attention to the steady disappearance of freshwater in the American East, from water-diversion threats in the Great Lakes to tapped-out freshwater aquifers along the Atlantic seaboard.

Told through a colorful cast of characters including Walt Disney, Jeb Bush and Texas oilman Boone Pickens, Mirage ferries the reader through the key water-supply issues facing America and the globe: water wars, the politics of development, inequities in the price of water, the bottled-water industry, privatization, and new-water-supply schemes.

From its calamitous opening scene of a sinkhole swallowing a house in Florida to its concluding meditation on the relationship between water and the American character, Mirage is a compelling and timely portrait of the use and abuse of freshwater in an era of rapidly vanishing natural resources.