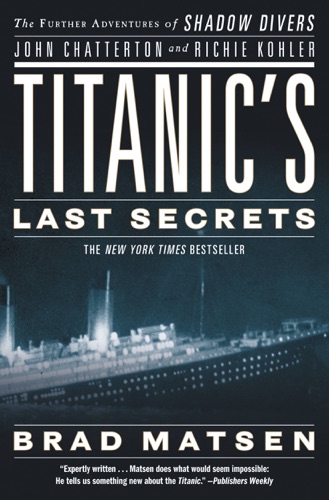 After rewriting history with their discovery of a Nazi U-boat off the coast of New Jersey, legendary divers John Chatterton and Richie Kohler decided to investigate the great enduring mystery of history's most notorious shipwreck: Why did Titanic sink as quickly as it did?

To answer the question, Chatterton and Kohler assemble a team of experts to explore Titanic, study its engineering, and dive to the wreck of its sister ship, Brittanic, where Titanic's last secrets may be revealed.

Titanic's Last Secrets is a rollercoaster ride through the shipbuilding history, the transatlantic luxury liner business, and shipwreck forensics. Chatterton and Kohler weave their way through a labyrinth of clues to discover that Titanic was not the strong, heroic ship the world thought she was and that the men who built her covered up her flaws when disaster struck. If Titanic had remained afloat for just two hours longer than she did, more than two thousand people would have lived instead of died, and the myth of the great ship would be one of rescue instead of tragedy.

Titanic's Last Secrets is the never-before-told story of the Ship of Dreams, a contemporary adventure that solves a historical mystery.