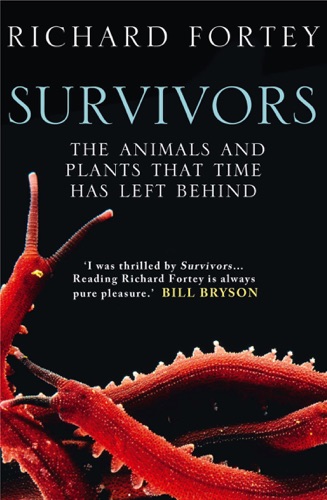 This ebook edition does not include illustrations.

An awe-inspiring journey through the eons and across the globe, in search of visible traces of evolution in the living creatures which have survived from earlier times and whose stories speak to us of seminal events in the history of life.

The history of life on Earth is far older – and far odder – than many of us realise. In ‘Survivors’, acclaimed author Richard Fortey traces this history not through fossil records, but in the living stories of organisms that have survived nearly unchanged for hundreds of millions of years and whose existence today affords us tantalising glimpses of landscapes long vanished.

For evolution has not obliterated its tracks. Scattered across the globe, strange and marvellous plants and animals have survived virtually unchanged since life first began. They range from humble algal mats dating back almost two billion years to hardy musk oxen, which linger as the last vestiges of Ice Age fauna.

Following in Fortey’s questing footsteps, ‘Survivors’ takes us on a fascinating journey to these ancient worlds. On a moonlit beach in Delaware where the horseshoe crab shuffles its way through a violent romance, we catch a glimpse of life 450 million years ago, shortly after it diversified on the ocean floor. Along a stretch of Australian coastline, we bear witness to the sights and sounds that would have greeted a Precambrian dawn. Finally, in the dense rainforests of New Zealand where the secretive velvet worm burrows into the rotting timber of the jungle floor, we marvel at a living fossil which has survived unchanged since before the dissolution of the Gondwana supercontinent.

Written with Fortey’s customary sparkle and gusto, this wonderfully engrossing exploration of the world’s oldest flora and fauna brilliantly combines the best science writing about the origins of life with an explorer’s sense of adventure and a poet’s wonder at the natural world. Utterly compelling, eye-opening and awe-inspiring, this is a book for anyone with an interest in evolution, in nature, in the remarkable scope of geological time and our own modest interaction with it – in short, in life itself.

Praise for THE EARTH: ‘A dazzling achievement. Richard Fortey is without peer among science writers.’ Bill Bryson

Richard Fortey spent his working life in palaeontology at the Natural History Museum, specialising in trilobites and becoming a world expert. He was elected President of the Geological Society of London for its bicentennial year of 2007 and is a Fellow of the Royal Society and of the Royal Society of Literature. He has received the Frink Medal, the Michael Faraday Prize and the Lewis Thomas Prize for science writing, as well as the silver medal of the Zoological Society for science communication. He is the writer of eight previous science and nature books, including two Sunday Times bestsellers, all of which are still in print. He has presented many television programmes across the BBC and other channels.