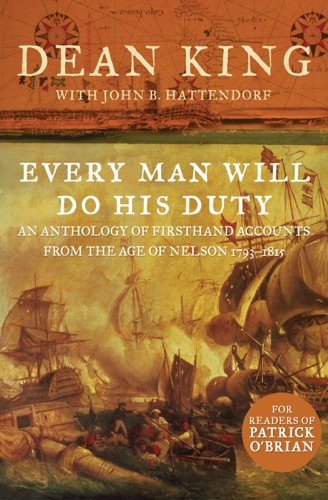 Napoleonic-era accounts of life aboard Royal Navy warships: “Readers of Patrick O’Brian and C. S. Forester will enjoy this collection” (Library Journal).
At the dawn of the nineteenth century, the British Navy was the mightiest instrument of war the world had ever known. The Royal Navy patrolled the seas from India to the Caribbean, connecting an empire with footholds in every corner of the earth. Such a massive Navy required the service of more than 100,000 men—from officers to deckhands to surgeons. These are their stories.  The inspiration for the bestselling novels by Patrick O’Brian and C. S. Forester, these memoirs and diaries, edited by Dean King, provide a true portrait of life aboard British warships during one of the most significant eras of world history. Their tellers are officers and ordinary sailors, and their subjects range from barroom brawls to the legendary heroics of Lord Horatio Nelson himself. Though these “iron men on wooden ships” are long gone, their deeds echo through the centuries.

Peril by Bob Woodward & Robert Costa - There Is Nothing for You Here by Fiona Hill - The Great Reset 2021-2030 Exposed!: Vaccine Passports & 5G Microchips, COVID-19 Mutations or The Next Pandemic? WEF Agenda – Build Back Better - The Green Deal Explained by Rebel Press Media - Battlegrounds by H.R. McMaster - The Asset Economy by Lisa Adkins, Melinda Cooper & Martijn Konings - Dark Emu by Bruce Pascoe - Empire of Pain: The Secret History of the Sackler Dynasty by Patrick Radden Keefe - Red Zone by Peter Hartcher - No Friend But the Mountains by Behrouz Boochani & Omid Tofighian - Agent Sonya by Ben Macintyre -