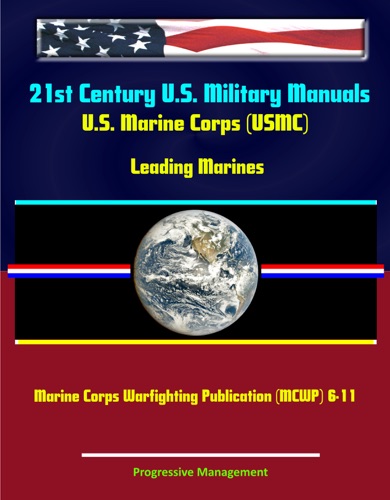 Part of our value-added professional format series of U.S. military manuals, this U.S. Marine Corps manual describes a leadership philosophy that reflects our traditional strengths as an institution and attempts to define the very ethos of being a Marine. It is about the inseparable relationship between the leader and the led, and is as much about the individual Marine—the bedrock upon which our Corps is built—as it is about any leader. There is less a line between the leader and the led than a bond. It is also about the Corps; about that unspoken feeling among Marines that is more than tradition or the cut of the uniform. It flows from the common but unique forge from which Marines come, and it is about the indefinable spirit that forms the character of our Corps. It draws from the shared experiences of danger, violence, the adrenaline of combat, and the proximity to death. All of this is based upon certain fundamental traits and principles of leading. Marines are not born knowing them, but must learn what they are and what they represent.
When teaching Marines, we have always drawn from a wealth of material that lies in our heritage and in our traditions. To capture some of that legacy, this manual begins with a chapter on our ethos, a chapter that attempts to identify just what it is that makes Marines. Being a Marine, after all, is different, and, therefore, leading Marines is different from leading in any other walk of life. It must be different because of who and what we are and what we do. It is different because of the character of our Corps—a character that lies at the very foundation of individual camaraderie, unit cohesion, and combat effectiveness. It is this character—our ethos—that gives Marines the pride, confidence, and hardness necessary to win.

Thus, the most fundamental element of leading Marines is to understand what it is to be a Marine, and it is on this understanding that we begin.