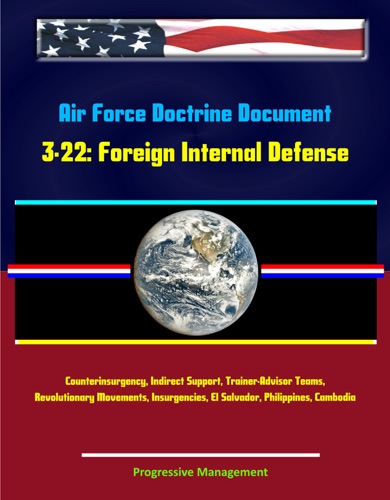 Today, the United States finds itself embroiled in counterinsurgency operations with multiple manifestations and broad implications.

The resurgence of radical Islam and its use of terrorism to subvert and overthrow established governments to reshape society in its own image is but one of these manifestations. Other manifestations include ultra-nationalist militants seeking political autonomy within existing states and the use of violence and illicit narcotics trafficking to subvert or overthrow legitimate governments.

Since the 9/11 tragedy, our efforts to prosecute terrorism and insurgency have produced the realization that a successful conclusion lies many years in the future and that success will be impossible without the active participation of global partners. A strategy of enabling partner nations to defend themselves against these internal threats is clearly emerging from that realization. US initiatives to support this strategy fall within an operating area termed foreign internal defense (FID). In fact, the Global War on Terrorism is taking place largely in the FID arena. The strategic end game is a partner nation capable of successfully integrating military force with other instruments of national power to eradicate lawlessness, terrorism, subversion, and insurgency.
Although Air Force forces can perform FID across the range of military operations, the main form of FID support consists of assessing, training, advising, and assisting foreign aviation forces. Doctrine stresses this indirect approach to capture those aspects of FID that apply worldwide and that extend beyond the present conflicts in Iraq and Afghanistan. Increased emphasis in this area can multiply US influence globally without requiring a standing-force presence in a multitude of locations.

We know that military forces in many lesser-developed nations cannot engage in joint and coalition operations without US Air Force FID assistance. While Air Force forces can apply airpower at virtually any level of intensity, our ability to prosecute an indirect approach is crucial to Air Force FID. Virtually all nations have laws prohibiting foreign combat operations within their sovereign territory. Accordingly, partner nation forces will, in most instances, have to take the tactical offensive supported by US Air Force training and advisory assistance. That form of assistance will most often be the instrument of both choice and necessity.

Where US forces must fight as a coalition partner with foreign forces, the full weight of airpower can be brought to bear in appropriate ways, and will play a crucial role. This doctrine document is designed to help Air Force commanders select appropriate options and tailor their efforts to fit the conditions at hand.