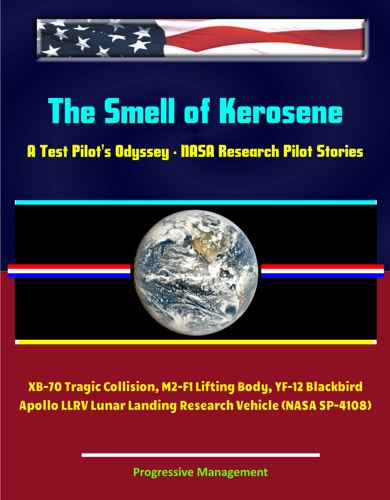 This official NASA history document - converted for accurate flowing-text e-book format reproduction - is the fascinating account of the life of Donald Mallick, a NASA research test pilot. This book puts the reader in the pilot's seat for a "day at the office" unlike any other. It recounts the tragic 1966 mid-air collision with the XB-70; describes flights of the lifting body and YF-12 blackbird, and details work with the Apollo Lunar Landing Research Vehicle.

The Smell of Kerosene tells the dramatic story of a NASA research pilot who logged over 11,000 flight hours in more than 125 types of aircraft. Donald Mallick gives the reader fascinating firsthand descriptions of his early naval flight training, carrier operations, and his research flying career with NASA and its predecessor agency, the National Advisory Committee for Aeronautics (NACA).

Mallick joined the NACA as a research pilot at the Langley Memorial Aeronautical Laboratory at Hampton, Virginia, where he flew modified helicopters and jets, and witnessed the NACA's evolution into the National Aeronautics and Space Administration.

Excerpt: " I was onboard an airliner, on 28 January 1986, when I heard the news that the Space Shuttle Challenger had exploded 73 seconds after launch that morning. Even knowing the complexity and risk involved in Shuttle operations, I was shocked by the news. The shuttle commander, Dick Scobee, had been an Air Force test pilot at Edwards and flown a number of research missions at NASA Dryden. I grieved for all the crew, but especially Dick, who I knew best. I can still recall his broad grin when he visited the Dryden pilot's office following the announcement of his selection as an astronaut. He showed great pride in his selection, and I congratulated him heartily. The results of the accident review board were hard to accept. The commission that investigated the accident blamed the Shuttle loss on poor management decisions. Challenger had been launched against the recommendations of knowledgeable technical personnel who insisted that low temperatures that day increased the chance of hot gas leakage around the seals of the solid rocket boosters. The commission found that the decision making process leading to the launch was flawed and that launch temperature constraints were waived at the expense of flight safety. It was a black day for NASA. I could sense a change in people's attitude concerning the space program. After the Challenger accident report was released, the public's pride in and respect for NASA diminished. At Dryden, we had always striven not to allow the desire to "get a flight off" to interfere with good judgment on flight safety. It was a cardinal rule. There were occasions when visiting Headquarters personnel and other VIPs were on hand to witness a test flight and we had to cancel the event due to some technical problem. We forced ourselves to avoid the desire to "press on" just to meet a schedule or impress a visiting VIP."