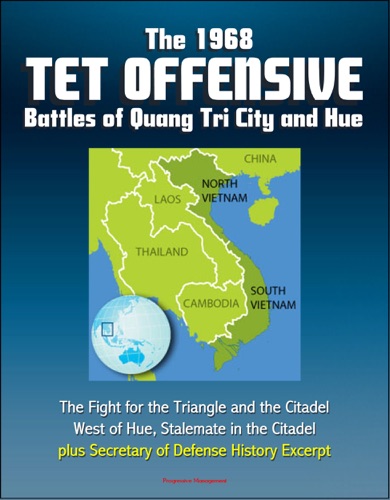 This monograph focuses on the battles of Quang Tri City and Hue that took place during the 1968 Tet offensive . The offensive itself, an all-out effort by Viet Cong and North Vietnamese forces to overrun the major cities of South Vietnam, marked the turning point of the Vietnam War. Although the attacks were costly failures in military terms, they set the United States on a path of disengagement from the war that ultimately led to the fall of Saigon some seven years later. The battles for the two northernmost provincial capitals in South Vietnam, Quang Tri City and Hue, are particularly worth examining because the enemy regarded them as key objectives, second only to Saigon, the national capital . To a large extent, the success or failure of the offensive depended on what happened there The battles tell us much about how the enemy prepared for the offensive, why he achieved a high degree of surprise and initial success, and why his attacks ultimately failed The battle for Quang Tri City, a textbook example of a vertical envelopment, resulted in a quick allied victory. The fight for Hue turned into a slow, grinding campaign of attrition that lasted nearly a month before the enemy was finally defeated. Together, they offer instruction on the strengths and limitations of airmobile warfare and a primer on urban fighting in a counterinsurgency environment, subjects that continue to be a major Army interest throughout the world. Contents: The 1968 Tet Offensive Battles of Quang Tri City and Hue * The 1st Cavalry Division Moves North * The Assault on Quang Tri City * Enter the Cavalry * Target: Hue * A City Besieged: 31 January-1 February * Thon La Chu: 2-10 February * The Fight for the Triangle and the Citadel: 2-10 February * West of Hue: 11-20 February * Stalemate in the Citadel: 11-20 February * The Final Push: 20-25 February * Aftermath

As a bonus, this reproduction includes an extensive excerpt about the Tet Offensive and the Vietnam War from an important DOD history book, History of the Office of the Secretary of Defense, Volume Six: McNamara, Clifford, and the Burdens of Vietnam 1965 - 1969. This material provides the view from the Pentagon and Washington of the war.