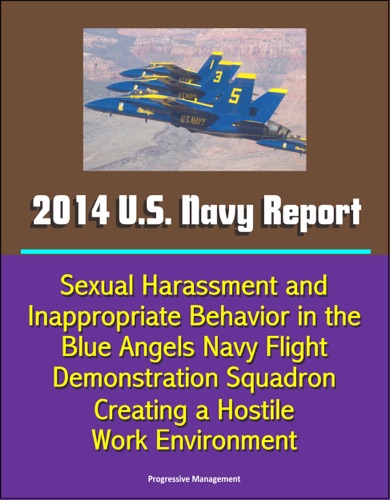 The U.S. Navy Flight Demonstration Squadron (Blue Angels) plays an important and integral role in the Navy's recruiting and public outreach efforts. However, the inappropriate behaviors and criminal conduct documented in this report reflect poorly on the Navy in general and Naval Aviation in particular. This report is not an indictment of the current Blue Angels or of the Blue Angels as a whole. In fact, immediately upon assuming command in November of 2012, the present Blue Angels' Commanding Officer, Commander Thomas Frosch, began implementing measures to reestablish good order and discipline in the squadron and the role the Navy expects of all our Commanding Officers.

In sharp contrast to his first tour, throughout his second tour as the Blue Angels' Commanding Officer, Captain McWherter and many in his command openly engaged in sexual harassment and other inappropriate behaviors, which he failed to correct. Examples include proliferation of explicit pornography and sexually suggestive images in the cockpits and in the "GroupMe" intra-squadron electronic communications tool, the painting of male genitalia on the roof of the center point trailer at the Blue Angels' winter training facilities in El Centro, California, and hazing during the enlisted "Cresting Process." Not only does Rear Admiral Crites' investigation demonstrate that Captain McWherter failed to take immediate and decisive action to guard against and suppress violations of Navy policy, it established that by condoning and encouraging unlawful behaviors over a sustained period, he created a hostile work environment.