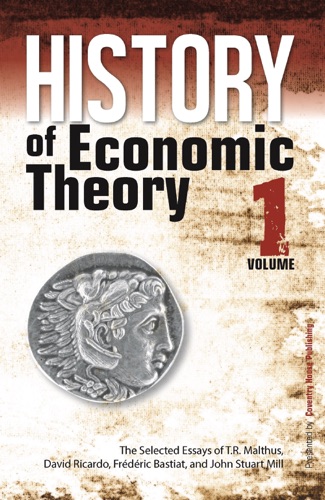 The History of Economic Theory features selected essays from influential economists of the 18th and 19th centuries. Included are the prominent works of T.R. Malthus, David Ricardo, Frédéric Bastiat, and John Stuart Mill. The integrity of the original essays has been carefully preserved, and no attempt has been made to add further commentary, dialogue, or reasoning to these fine compositions. Res ipsa loquitur. The work speaks for itself.

By T.R. Malthus:
- An Investigation of the Cause of the Present High Price of Provisions
- Observations on the Effects of the Corn Laws, and of a Rise or Fall in the Price of Corn on the Agriculture and General Wealth of the Country
- The Grounds of an Opinion on the Policy of Restricting the Importation of Foreign Corn; Intended as an Appendix to "Observations on the Corn Laws"

By David Ricardo:
- The High Price of Bullion, a Proof of the Depreciation of Bank Notes

By John Stuart Mill:
- Essays on Some Unsettled Questions of Political Economy, Essay IV: On Profits, and Interest