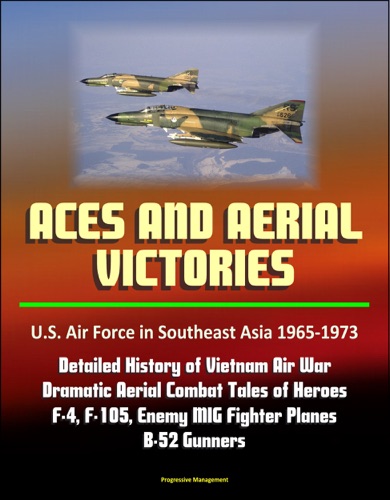 Aces and Aerial Victories is a collection of firsthand accounts by Air Force fighter crews who flew combat missions over North Vietnam between 1965 and 1973. They recall their air battles with enemy MIG fighters, the difficult and dangerous tactical maneuvers they had to perform to survive, and their victories and defeats. The narratives are taken directly from aircrew after-action reports. The unofficial title of "ace" originated during World War I in recognition of a combat pilot who had shot down five enemy aircraft (including observation balloons). The honorific title was used again during World War II, the Korean War, and the war in Southeast Asia to recognize similar exploits. Credits for the destruction of enemy aircraft in the area are confirmed by the Air Force. The manner of awarding them, however, has varied from war to war and even from theater to theater (as in World War II). The different guidelines reflected the different circumstances in each theater and each war, and the weapons technology employed by both sides.

The criteria established for aerial victory credits were not much different from those used during the Korean War. Credit was given to pilots of any aircraft and to gunners in multiplace aircraft if they fired the weapon that destroyed the enemy aircraft or caused it to crash. While credits were awarded only for the destruction of enemy aircraft, claims were accepted for probable destruction or damage.

During the war in Southeast Asia, U.S. Air Force fighter pilots and crewmen were repeatedly challenged by enemy MIG's in the skies over North Vietnam. The air battles which ensued were unique in American history because U.S. fighter and strike forces operated under stringent rules of engagement. With periodic exceptions, for example, MIG bases could not be struck. The rules generally forbade bombing or strafing of military and industrial targets in and around the enemy's heartland, encompassing the capital of Hanoi and the port city of Haiphong. These restrictions gave the North Vietnamese substantial military advantage. Free from American attack and helped by its Soviet and Chinese allies, the enemy was able to construct one of the most formidable antiaircraft defenses the world has even seen. It included MIG forces, surface-to-air missile (SAM) batteries, heavy concentrations of antiaircraft artillery (AAA) units, and an array of early warning radar systems. These elements sought to interdict and defeat the U.S. bombing campaign against North Vietnam's lines of communication and its military and industrial base. The primary mission of U.S. fighter pilots was to prevent the North Vietnamese MIG's from interfering with U.S. strike operations. This book tells how American airmen—assisted by an armada of other USAF aircraft whose crews refueled their planes, warned of approaching enemy MIG's and SAM's, and flew rescue missions when they were shot down— managed to emerge from their aerial battles with both victories and honor.

An enemy aircraft was considered destroyed if it crashed, exploded, disintegrated, lost a major component vital for flight, caught fire, entered into an attitude or position from which recovery was impossible, or if its pilot bailed out. The claim had to be substantiated by written testimony from one or more aerial or ground observers, gun camera film, a report that the wreckage of the enemy aircraft had been recovered, or some other positive intelligence that confirmed its total destruction. No more than two 2-man crews could be credited with downing a single enemy aircraft, thus limiting the smallest share in a victory credit to one-fourth. Every detail had to be described as clearly as possible to insure that claims were evaluated judiciously and speedily.